Got a mobile app? Test it on your toddler first.

I know you’re not really supposed to give your toddler an iPhone or iPad, but, really—it can’t be helped sometimes.

Before I had a kid, I’d judge parents who would give their child an iPhone. But now that I’m a parent, I totally understand. Parenting is hard, and parents are usually exhausted. Sometimes it’s the only way your toddler will stand in that Santa lineup for 20 whole minutes.

If you’re a parent and you haven’t given your child your smartphone or tablet, that’s great! I envy your discipline. The American Academy of Pediatrics suggests that screen time should be avoided for children under the age of 2. I agree with them. My toddler only gets my iPhone occasionally, not all the time, everyday.

But for the purposes of this post, let’s assume it’s more than likely that your toddler is going to get their hands on your mobile device sooner or later.

Kids are pretty comfortable with smartphones and tablets. I’ve watched my 2 year-old daughter use my iPhone over the past few months and she picks up on things pretty quickly, especially when she’s motivated. (I’m not saying she’s advanced for her age or anything, but she did figure out how the trackpad on a Macbook Air works—on her own—just so she could play the next toy-unboxing video on YouTube without having to ask us. So clearly she is advanced for her age.) Kids are fearless that way, they’ll click anything. They’re not scared of your app or what clicking that button will do. It’s just a button that needs to be clicked. They’ll keep trying until they’ve figured out the pattern.

Usability Testing is when you observe real users using your app to evaluate features and interaction design.

If you’re developing a mobile app or a mobile website, I suggest you try usability testing it with your toddler first and see how well they can use it and where they get stuck.

Sure, your toddler isn’t a real user—they’re more the “disinterested-but-will-take-a-look-in-case-there-are-Sesame-Street-videos-on-here” user persona. But thats a pretty good fill-in for a persona you may already be targeting: the “skeptical-but-will-look-around” user.

Besides, your toddler already has your phone, so you might as well put them to work. If they want to be compensated, remind them that pull-ups are expensive and they should be out of them by now.

Here are some observations I’ve made over the past few months watching my two-and-a-half year-old using apps on my iPhone:

In Photos app, she wants to see the latest photos and videos. She rarely clicks Photos or Shared tabs. Photos shows your entire collection by year, and I have nothing in Shared folder. Those features are useless to her. She almost always goes to Albums and taps All Photos or Videos album. She’s interested in viewing recent photos and videos, not navigating and nostalgia.

Takeaway: Emphasize the actions your users want the most and give less weight to, or drop entirely, features that are not as important.

And mostly ignores the link buttons that iOS7 introduced. In the Photos app, the only interaction that trips her up is if she accidentally clicks Select in top right corner.

When you click Select, it goes into selection mode where you can select multiple photos. The only way to get out of selection mode is to click Cancel, which is at top right and doesn’t look like a button.

In other interaction patterns, clicking elsewhere usually escapes or closes, like clicking on the main screen closes a slide out menu. My daughter doesn’t notice that Cancel button and usually hands the iPhone back to me and says, “Dadda fix”.

Back Button is Always at Top Left

I’ve watched her click through multiple apps and she’ll assume back is at the top left. She’ll click even if the button is barely visible like it may be the case in Rdio app where a white button is layered on top of a white album cover. 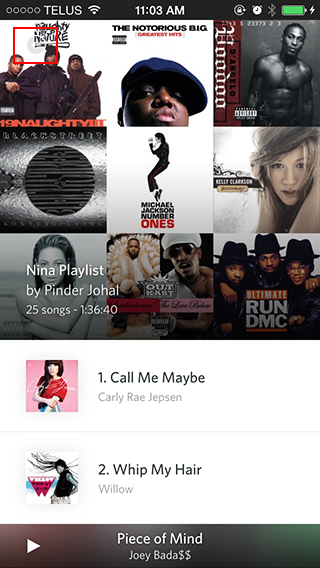 She just expects it to be there.

Takeaway: This is pretty standard practice in most mobile apps, but it’s still important: Don’t make your users learn a fancy new navigation pattern because its cool and different. It’s not cool, go with what they already know.

If there’s a bottom navigation menu, she’ll usually click each button, scroll up and down on the resulting screen, and then continue to the next button, left to right until she’s clicked them all.

If there’s a hamburger icon which opens a slide out menu or an off canvas menu, she will usually just click away to close it. 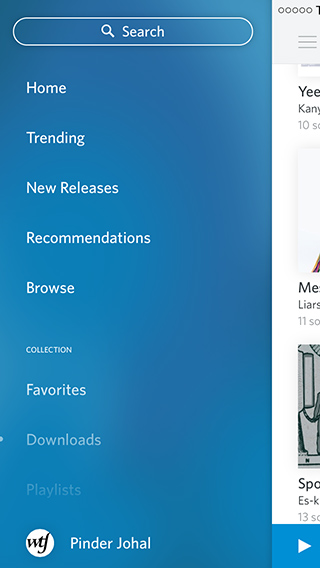 If a security message like “Photos would like access to your Location”, she obviously doesn’t read it and clicks the first button to get rid of it, which is Don’t Allow.

Takeaway: Most users won’t read, or will get scared of the security access warning. In iOS, if a user clicks Don’t Allow, it takes multiple steps in Settings to re-enable that permission for that app. That is a Herculean task to ask a user to complete. It’s easier for the user to ignore that feature, or the app entirely. A good technique is to onboard permissions before the security warning appears, showing a pre-permission dialog box that better informs the user, in context, why the permission is needed. Brendan Mulligan highlights this technique in his post, The Right Way to Ask Users for iOS Permissions.

She Has Found Bugs

My toddler might even find bugs due to the chaotic nature of how she randomly clicks. I’ve noticed bugs in apps when she rapidly clicked a button, and the resulting screen flashed and loaded twice because there may have been a loading delay with the first click.

Takeaway: Test for non-typical users too. Most users won’t rapidly click, but I’ve seen people who still double-click buttons on websites since thats an interaction pattern they first learned on their Windows 95 desktop machine. But randomly clicking things may show performance bottlenecks in your application that your developers can account for and possibly make your app faster, which is better for everyone.

As you’ve probably noticed, most of these observations actually line up pretty well with current mobile best practices. That’s because needs like navigation and primary usage are universal among all your users. Including toddlers. A photo app should show photos and be easy to use and not get in the way. A business application should allow it’s users to complete their task in the easiest, most unobtrusive way possible. Usability testing gives you a sense of how real users will use your app. But even before you get to the point of organizing a full usability test, try a preliminary version with your toddler first.

There’s a good chance none of this will work with your toddler, especially if your app is some boring business app that doesn’t feature Elsa from Frozen. That’s ok, let them be kids. Put on Frozen, it’s a good movie.

Do you have an app that requires usability testing, and not just from toddlers? Contact us, we have a team of usability experts that will help you evaluate your app and write reports with key findings and recommendations. Things toddlers can’t do.

Pinder Johal is a software developer at OpenRoad. He has seen Frozen many times.