With over 15,000 self-proclaimed social media experts on Twitter and all of the year-end buzz about Web 2.0 concepts in everyone’s 2009 top 10 list, it’s often easy to overlook some of the basic business value provided by that other Web, you know, the older more pedestrian Web: Web 1.0.

In 2006, OpenRoad was awarded a contract by the BC Ministry of Transportation to build a web-based system to help commercial vehicle carriers (ie: truckers) around the province of BC apply for their National Safety Code Certificate.

The certification process is about keeping BC’s roads safe, ensuring that commercial truckers abide by a nationally agreed upon set of rules for their vehicles and drivers. In BC, there are over 26,000 commercial vehicle companies operating over 76,000 vehicles.

Obtaining an NSC certificate is mandatory for the truckers of BC. You have to have one. In years gone by, this process involved filling in a lot of forms, sending them via mail or fax to the BC government, then waiting to hear back on your status. Roughly 80 to 90% of the time, the submitted information was incomplete or incorrect and there would be extensive back and forth between the trucker and the government. Time would pass (typically just over a week) and eventually the certificate would be issued. Close to 3000 applications were received annually with that number growing each year.

And so the CVSE tendered the work to build a web-based system to automate the application and approval of NSC certificates and OpenRoad was the successful proponent.

The application is simple. Truckers go through a multi-part online form that mimics the information collected previously via paper-based forms. They submit information about their company, their vehicles, their drivers, and their safety record. They attach supporting documents, if necessary, then they make their payment and exit the e-service. 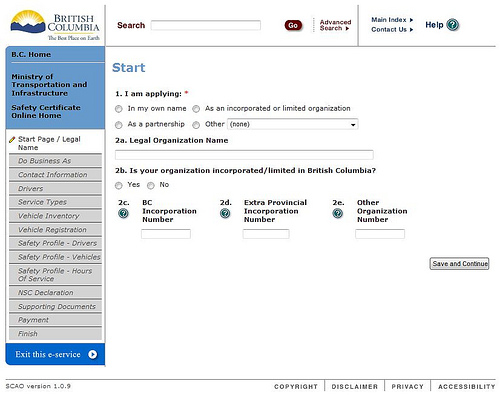 The business objectives of the team were aggressive: reach a 50% adoption of the online application form within one year of implementation. That’s right, move half of the applications from a paper-based system to an online system within in the first year. If you’re a business owner of a manual-paper based process and you’re contemplating moving it online, how comfortable would you be in targeting 50% adoption? Year two (2009) the team hoped for 70% adoption, year three (2010) 80%, and year four (2011) 90%.

The team was optimistic and dedicated to the success of the program. And they were right in reading the demand of their target customer, the commercial vehicle carriers.

But the results were well beyond anyone’s expectations.

The Safety Certificate Application Online (SCAO) launched in 2008 and within the first year of usage achieved an 80% adoption rate and it continues today to increase towards the 90% year four target. The average time to process an application dropped from 8 days to 1 day with the increased accuracy of information submitted. Overloaded clerical staff were re-assigned to other more pressing tasks within the Ministry and the cost savings have been significant.

Automating paper-based processes using web based applications may seem like old news to many, but the point we believe SCAO has made is important: there’s still lots of value in Web 1.0, servicing the needs of inefficient business processes that consume far too much time and effort than is required.

And don’t underestimate the appetite for your customers to utilize the tools and technologies you create. Who knew commercial truckers would be so willing to adopt an online tool? Ease of use was an important factor in the application’s success, but the real driving force wasn’t usability but utility. It was clear that the process could be made better and SCAO provided that. The usefulness of the application was so compelling that everyone started using it immediately.

So while you’re looking at your web strategy, don’t get too distracted with social media and microblogging and all that wonderful 2.0 stuff – there’s still plenty of room left for innovation using 1.0 approaches, ones that drive real value, demonstrate real ROI, and improve customer and employee satisfaction.