News and events ▸ Escape the car One Day this week

Published in The Vancouver Sun, by Maurice Bridge

Talk is cheap, but living up to your principles doesn’t always have to be expensive.

On Thursday, Tom Osdioba plans to show Vancouver how it can be done. 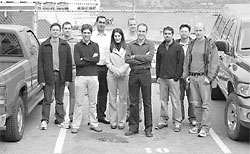 It’s called One Day and it’s a program that is literally about making changes toward sustainability one day at a time.

“I think the idea of One Day, and taking action for one day and picking a small first step for each person in the city, can be connected to a broader value about what’s great about Vancouver,” says Osdioba, who is manager of sustainability for the City of Vancouver.

“It’s a little bit too hard to take action when you’re thinking about something that’s too abstract.”

The vehicle for launching One Day is Car Free Day, an international event celebrated in 1,500 cities by a total of 100 million people worldwide.

From noon to 8 p.m., the city is encouraging people to walk, run, skate, cycle, take transit or share a ride to Gastown for a festival. Water Street and a block of Carrall Street will be closed to vehicles and filled with music, performances and displays promoting healthy and affordable ways people can get around.

But while Car Free Day is just that — a single day — Osdioba wants Vancouverites to try to find a day every week to do something to help the city’s sustainability.

Among One Day’s goals is the reduction of greenhouse-gas emissions to a level six-per-cent lower than they were in 1990 in the next seven years, which would would require a reduction of more than 25 per cent on a per-person basis.

Osdioba says cycling is turning out to be an eye-opener for people.

“Already in a few months, we’ve seen examples of people who’ve said ‘I’m going to ride my bike one day a week,’ and they start riding their bike once a week, and all of sudden they find this is a pretty good way to do it — I feel good in the morning, I’m getting some exercise I wouldn’t otherwise get — and they’ve gone on to do it more.”

Promising not to make decisions that compromise the choices of our children and future generations, or recognizing that the Vancouver economy should move away from its dependence on non-renewable carbon-based fuels sounds good, but finding practical ways to do it is a little tougher.

As Osdioba notes, our choices have to not only make things better for the environment, but need to show us tangible benefits if we are going to stick to them.

That idea has already taken root at a small Gastown company, where only two out of 13 staffers regularly drive to work.

“The fact that we’ve got the station right next to our office means that pretty much everybody jumps on a train, a SeaBus, a SkyTrain or a bus, and gets here that way,” says Gord Ross, vice-president and partner in Open Road, a consulting firm that specializes in the development of custom Internet applications.

“Everybody just said either I can drive my car downtown and battle traffic for an hour-and-a-half or two hours every day and spend a fortune on parking, or I can jump on the SeaBus or jump on the SkyTrain or ride my bike down in the summertime and park it in the office.”

Open Road staff commute from Mission, North Vancouver, Kitsilano, New West, east Vancouver, Burnaby and Pitt Meadows, and they all have their own reasons for doing it.

“If I were in traffic, it would probably be a headache with the congestion,” he says. Besides, he adds, “SkyTrain’s electrically powered, so I think that’s helping.”

Software developer Jeff Pennal sees a direct family benefit from his use of transit from Burnaby: “I have a nine-month-old and my wife needs the car more than I do.”

These are samples of the kind of action Osdioba is promoting.

“Taking action now to reduce our energy use and our emissions helps [reduce] the impacts on our climate and our landscape from something like climate change,” he says.

“We really don’t know what the future is going to bring; we know it’s going to bring some change, so the more we take action now, the less change we’re going to face and the more likely we are to continue to have this sort of climate and these sorts of outdoor landscape and recreation opportunities.”