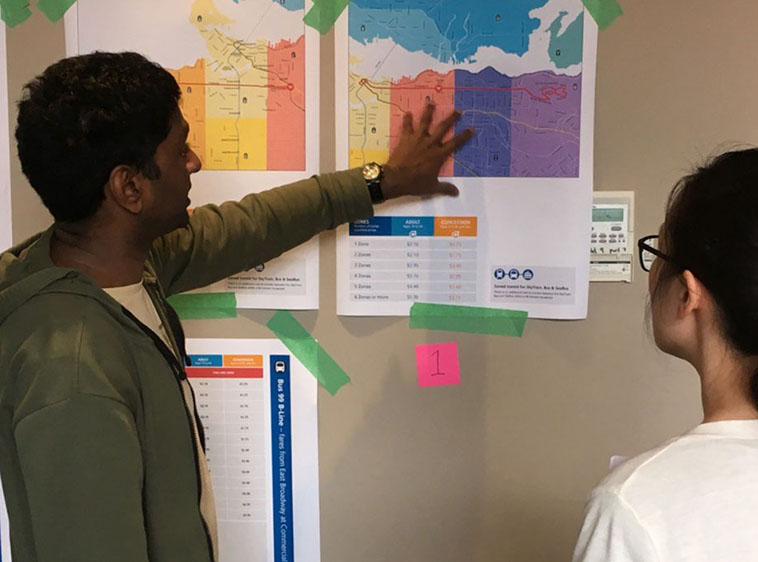 If you’re in Vancouver, you have likely been hearing a lot about TransLink’s Transit Fare Review. TransLink’s three-zone fare structure was largely unchanged for over 30 years. In that same time, the region grew by over one million people. Regional growth, the launch of the Compass fare technology, and general public dissatisfaction with the current fare system meant that it was time to take a fresh look at fare policy. Could TransLink make fare policy changes that would increase ridership, provide a better customer experience, and improve system efficiency?

OXD’s Service Design team worked with TransLink to help frame and understand the transit customer experience. Our methods included fieldwork, design research, workshops, prototyping, and testing of policy concepts. Using a design thinking-informed approach, we uncovered valuable customer insights into how policy would be experienced long before it was implemented and rolled out to the public.

Too often, government and civil policy decisions are made without contemplating the design implications. The traditional policy making cycle is often one-directional and linear. Typically, public consultation happens after policies are formulated. Put another way, there’s too little input from customers, and systems are difficult and expensive to change once they already exist. Our approach empowers policy makers to see things through a different lens and involve customers in the early stages.

Our Service Design team created a series of prototypes using TransLink’s proposed fare structures and tested them with real customers. This produced qualitative data that answered a number of TransLink’s questions. For example, could customers accurately calculate the cost of their trips in a new distance-based model? The TransLink team saw first-hand where their ideas excelled or fell short.

In a traditional policy making environment, there’s rarely opportunity to observe the design implications of your ideas—that’s considered a problem for the signage and wayfinding team or the digital team to figure out. This means that the shortcomings of a product or service only become known when customers use it, a costly and late-stage learning to make. Working with prototypes gave TransLink the opportunity to learn, iterate, and improve. This led to a better customer experience that’s cheaper and more efficient than making changes to a system that’s already been implemented.

Before going out and talking to customers, we needed to understand the broader context of the fare policy. It was important to get TransLink staff’s perspectives on what would be a significant and historic change to the business. At TransLink’s head office we engaged employees across teams through strategic design activities like the Future, Backwards exercise, ecosystem mapping, and drivers of change. Getting stakeholders in the organization aware of shared and different perspectives at the onset ensured efficient decision making later on. Once we had a common understanding of the issues within the project team itself, we started on customer engagements.

Our Service Design team ran a narrative workshop with a diverse mix of TransLink customers to elicit rich stories around their transit experiences. These workshops allowed customers to reflect on times they had felt confident, confused, or at a loss while using transit. Our Service Design team then extracted twelve customer experience themes from these workshops. Armed with our workshop data, we then took to the streets of Metro Vancouver. Our team went on to interview over 160 customers across the system from bus stops to SkyTrain stations.

Our customer experience insights helped TransLink planning and policy staff better empathize with the lived experience of their customers. These transit riders often possessed a partial knowledge of how the fare system works and would assess the value and cost of a fare in relation to the overall affordability of life in Metro Vancouver.

Insights in hand, we supported TransLink through co-design, prototyping, and testing of fare concepts with customers. Using designed artifacts we worked with the TransLink team on further learning and validating of concepts.

Our Service Design team provided compelling, evidence-based recommendations for policy implementation. With this design thinking approach TransLink learned from their customers and improved their ideas.

TransLink was able to assess the pros and cons each concept using our data. They’re able to plan ahead and address any shortcomings of the option they move forward with. For example, we saw during the prototype testing that many people don't know how far they travel for their commute. This suggests TransLink will need to assist riders in determining distance, as they move towards a proposed distance-based model. Design for policy helped TransLink anticipate the eventual implementation of the service and the need to educate customers on calculating travel distances. While this fare concept was more challenging to understand, it was deemed more fair and equitable than the current zone system by the public through 50,000 survey results. By taking a design for policy approach, TransLink can deliver a better customer experience for all, and a better policy.

Want to learn more? Sign up for our Design for Policy newsletter, or get in touch with us about your next service design project.